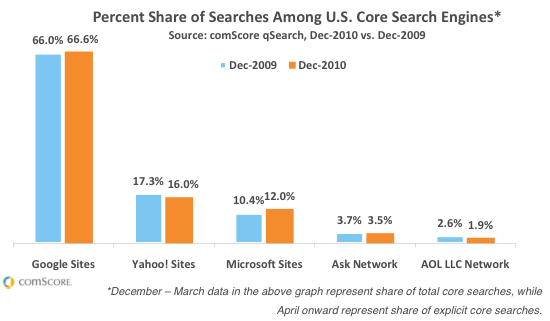 Google remains ahead of its search engine competitors. comScore Networks released its monthly qSearch analysis of search engines for June 2006, finding that Google gained in search market share for the 11th consecutive month and maintained its status as market leader with 44.7 percent of searches or 2.9 billion searches. Yahoo! was in second place, increasing its share to 28.5 percent, followed by MSN with 12.8 percent, comScore reported. It also found that Americans conducted 6.4 millions searches in June, a 6-percent decline from May but a 29-percent increase over June 2005. comScore attributes the decline as a seasonal effect. comScore also reported that Google and Yahoo! dominated the toolbar search market with 49.6 percent and 46.1 percent respectively.